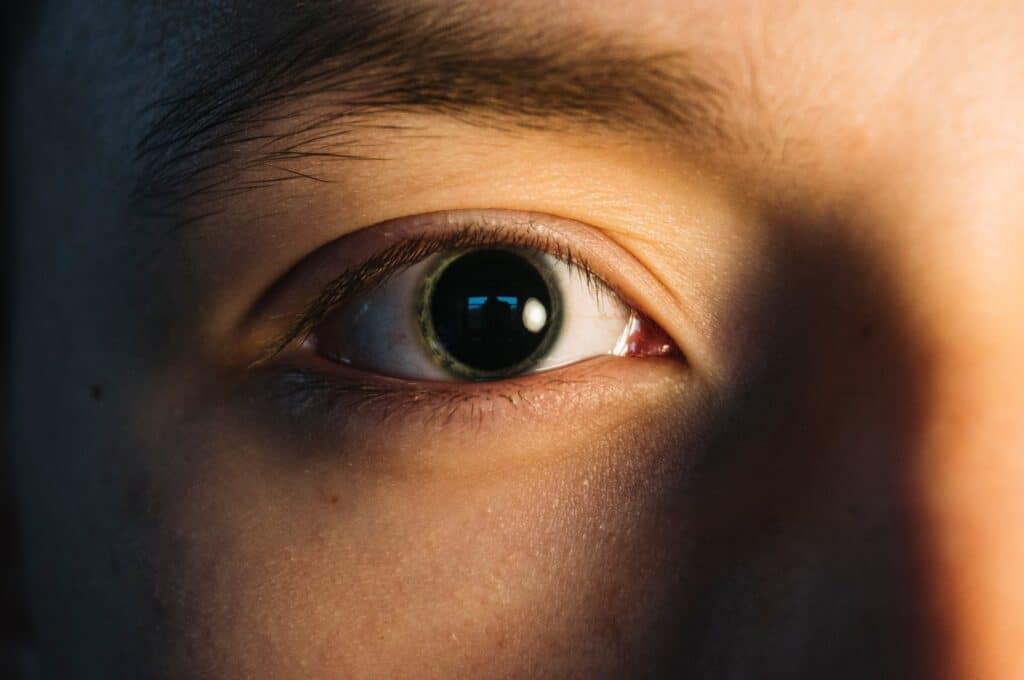 This entry was posted in Addiction Articles, Opiates and Opioids and tagged opiate pupils on February 10, 2022 by Harmony Place.

The dark part of your eye is called the pupil. Depending on the lighting conditions, your eyes can grow or shrink. However, other factors, such as drugs, can also affect the size of your pupils. Opioids and opiates cause your pupils to constrict, or get smaller (miosis). Opiate pupils are “pinpoint pupils” that don’t respond to changes in lighting. This is a sign of an opioid overdose.

Technically, “opiates” refer to just the opioids that are “natural” or made directly from the poppy plant, while “opioids” refer to all the opioids, including the ones that are natural, synthetic, or semi-synthetic. Thus, all opiates are opioids but not all opioids are opiates.

Opioids act just like opiates in the body because of their similar molecules.

Alcohol and drug abuse cause side effects like nausea, drowsiness, and loss of coordination but they also have an effect on your eyes. Changes in the eye, such as motion, pupil size, and the color of the whites of the eyes can help to determine whether a person is intoxicated and what substance they used.

Pupils dilate (expand) in low light. This makes it possible for more light to reach the retina, which makes it easier to see. Color and distance are other external factors that affect pupil dilation.

You’ve probably heard that looking at someone you love can make your eyes dilate. That’s because your pupils are affected by internal factors too. Internal factors that affect dilation include:

Pupil dilation is an involuntary nervous system response, whether it’s caused by internal or external factors. You can’t control it, even if you want to.

Why Do Drugs Affect Your Pupils?

Drugs affect the muscles that enlarge or shrink your pupils. Many drugs impede your brain’s chemical messengers, known as neurotransmitters. Neurotransmitters play a part in the size of your pupils. Therefore, using the following drugs can cause dilated pupils or constricted pupils as a side effect.

Why Do Opioids Constrict Your Pupils?

An individual that suffers from heroin addiction will display constricted, even pinpoint pupils. Along with the unique pupil size, their eyes will often be bloodshot and maybe a little droopy. Other abused drugs can affect the eyes, but heroin and other opioids are common in bringing about the constriction of the pupils.

The fact is, most other substances cause the pupils to enlarge, or dilate. The constriction that happens to heroin users occurs when the heroin attaches to the opioid receptors in the brain and changes the central nervous system.

What are the Effects of Opiates on Your Body?

According to the National Institute on Drug Abuse (NIDA), while nearly half a million people in the U.S. suffered from heroin addiction in 2012, it was estimated that over 2 million abused opioid painkillers. The abuse of opiates, whether it’s prescription painkillers can seriously affect your health. They too can cause opiate pupils.

Effects on the Brain

Humans and animals both have opiate receptors in the brain and these receptors act as action sites for different types of opiates. The purpose of these sites is due to the existence of internal neurotransmitters that act on these sites and cause reactions in the body that are similar to the effects of opiate drugs.

Opiates and opioids work by attaching to receptors in the brain, imitating the effects of pain-relieving chemicals that are naturally produced. This blocks the perception of pain and causes feelings of well-being and even euphoria. As the effects of the drugs become more tolerated, you may begin using increasingly higher doses of opiates to get the same effects and reduce symptoms of withdrawal.

Effects on the Respiratory System

An overdose of opioids or heroin can cause respiratory depression (slowing of breathing). At high enough doses, a respiratory arrest can rob the body and brain tissues of oxygen. This can result in organ system injury or fatality.

Effects on the Digestive System

Effects on the Nervous System

The continual use of opioid painkillers can cause hyperalgesia. This is a syndrome characterized by increased sensitivity to pain. In addition, chronic use is linked to a loss of coordination and an overall slowing of a person’s physical movements.

Effects on the Immune System

Because opioid receptors are involved with regulating immunity, opioid painkillers are also associated with restraining the immune system.

Why Are Prescription Opiates Dangerous?

Prescription opiates can be dangerous because they affect strong reward systems in your brain. You can become addicted even when taking them exactly as they were prescribed. However, the dangers are increased when you don’t take them as directed or when you combine them with other substances. In addition, people have individual differences in genetic susceptibility to opiate addiction.

Street drugs like heroin are often diluted and may contain contaminants and infectious materials. Injecting contaminated heroin can cause infections to enter the blood and reach the lining of the heart, resulting in inflammation.

Some contaminants can travel through the body and be trapped in small capillaries causing clots. This cuts off blood flow and can cause damage to certain organs. Another danger recently is the potential overdose from heroin adulterated with fentanyl, a drug that is 50 times stronger than heroin.

Sharing needles with other addicts when injecting heroin or crushed pills can spread blood-borne microorganisms such as:

Injecting repeatedly can lead to increasing vein damage that can cause veins to collapse eventually.

Effects of Other Commonly Misused Drugs on Your Eyes

Used in excess, almost every substance has the capability to cause changes in your eyes. These are some of the changes:

Getting Treatment for Opioid Addiction

There is proven, successful treatment for opioid addiction. Harmony Place can provide you, or someone you care about, with a comprehensive, personalized treatment plan to help you on your way to recovery and fulfilling life. We can also provide you with evidence-based treatment at several levels of care with a range of approaches to therapeutic treatment.

This is just some of what we offer:

Depending on the severity and duration of your addiction, you may need a medically supervised detox to help you with the symptoms of opiate withdrawal such as:

Many individuals feel so terrible that they return to using because of the difficulty of the withdrawal symptoms.

Harmony Place can offer programs with several different levels of care, depending on your needs, so that you enter treatment at the appropriate level and are able to continue until you are ready. Our levels of care are:

These descending levels of care allow you to step down to a lower level of care as needed when you complete one of the higher levels.

Many people don’t feel quite confident enough to return to a full life away from the support of treatment and other sufferers. A sober living residence is a perfect way to build confidence and transition into “normal” living.

Addiction therapy is the treatment that helps you end your addiction and prevent relapses. At Harmony Place, you may receive these therapeutic approaches among others:

Harmony Place for Your Recovery

We here at Harmony Place, are located in Woodland Hills, CA. If you live in the area and suffer from opiate pupils,  you want to get away to make a fresh start. We are here to help. Contact us today and find out what we can do for you.