While the concept of alcoholism and alcohol addiction might seem pretty cut and dry, it is much more complicated than what it might seem on the surface. There are many different stages when it comes to alcoholism, each with its own set of mental and physical side effects and ailments. The final stage is what is known as end-stage alcoholism and it is by far the most severe of all the stages. It also has the most significant consequences when it comes to both physical and mental health.

In this blog, we will take a look at what exactly end-stage alcoholism is and where it fits on the list of stages of alcohol use disorder. We will also take a look at some of the signs and symptoms of this type of alcoholism and how you or a loved one can get help for it.

What Is End-Stage Alcoholism? 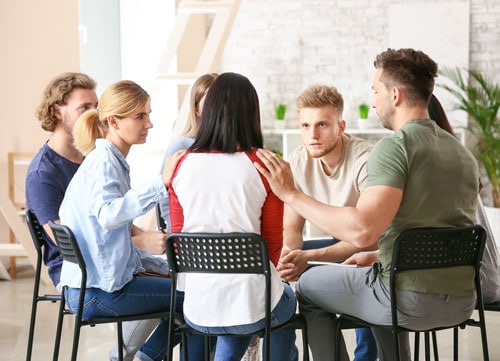 Simply put, end-stage alcoholism is the final stage of alcoholism. At this point, someone who is in this stage of alcoholism has been abusing alcohol for an extended period of time, usually several years. They have likely developed numerous physical and mental health problems as a result and are now dealing with that on top of their alcohol addiction.

At this point in their alcoholism, they have also likely done a lot of damage to their personal life as well. They might have lost their job, run out of money, and been cut off by family and friends due to their destructive behavior. If someone has reached this stage of alcoholism they need to seek out medical care and treatment immediately before their symptoms begin to worsen and they risk dying.

The first stage of alcoholism is social drinking. This is by far the most innocent and non-threatening stage. It is also the stage in which the majority of people stay when it comes to their alcohol consumption. Social drinking is just what it sounds like. It’s going out with some friends or coworkers and having a drink or 2, maybe at happy hour or another social event.

Once someone has hit the binge drinking stage, the next step in the progression is what’s known as heavy drinking. When a person has hit this stage, alcohol has become a significant part of their daily life. They will begin to drink more frequently and oftentimes on a daily basis.

They will also likely drink in excess most of those days as well. While a person can reach this stage and still not be considered to have an alcohol abuse issue, it is at this point where a conversation might need to be had about an alcohol issue developing.

At this point in the progression, an alcohol-related problem has begun to develop. At this point, the drinker has begun drinking in order to feel normal. They may even begin experiencing early stages of withdrawal symptoms when not drinking. At this stage, the drinker might also begin to show some of the typical signs of dependency such as a lack of motivation, changes in activities or social groups, or trouble completing basic daily tasks.

They will continue to drink even if they know that they shouldn’t because their dependency has grown to a point where they believe that they can’t function properly without drinking. They will also experience the fullest extent of withdrawal symptoms should they try and stop. Many people will seek out treatment once they reach this stage either on their own accord or through the help of their family and friends. For those who reach the addiction stage and do not seek out help, the next stage they will reach is end-stage alcoholism. At this point, their alcoholism can cause a great risk to their overall health, both mental and physical. During end-stage alcoholism, the liver will become damaged sometimes even permanently. Since the liver is so vital to the overall performance of the body, this can result in other significant health problems such as liver disease, cancer, dementia, or even a stroke.

If you or someone you know has made it to this stage it is important to seek out medical care immediately. If not treated right away, end-stage alcoholism can lead to permanent brain damage and death.

What Are Some of the Symptoms Associated with End-Stage Alcoholism?

We briefly mentioned some of the extreme symptoms that can be a result of end-stage alcoholism above, but it’s important to know all the symptoms associated with this stage of alcoholism, especially if you have a family member or loved one that you fear might be at this level when it comes to their alcohol abuse. Let’s take a look at some of the serious health complications that can occur as a result of end-stage alcoholism.

When a person reaches end-stage alcoholism, they are drinking so much that their liver is unable to metabolize all that alcohol in a timely manner. When that happens, the liver will send the alcohol back into the bloodstream which can cause the liver to harden and scarring of the tissue can occur. The scarring of the tissue is known as cirrhosis and it is considered the final stage of alcohol-related liver disease. Even before contracting cirrhosis, the drinker might begin to notice other symptoms associated with the early stages of liver disease. These symptoms include: Also known as alcohol dementia, Wernicke-Korsakoff Syndrome occurs when there is a shortage of the B1 vitamin which can result in dementia-like traits developing. This condition can result in:

While the ultimate goal is to get treatment before the alcohol issue gets to end-stage alcoholism, the good news is that it is still treatable, although it’s significantly harder to treat.

During detox treatment, you will have access to around-the-clock medical care and supervision. Detoxing should be done at either a medical facility, a dedicated detox center, or a treatment center that also provides detox services such as Harmony Place. Self-detoxing can be incredibly dangerous and even life-threatening.

Support groups, such as AA are also a great way to help recover from this stage of alcoholism. These support groups are particularly helpful once treatment has been completed and you return to your normal, daily life.

Do You Suffer From End-Stage Alcoholism?

End-stage alcoholism is very serious and can lead to major health issues that can ultimately lead to death. If you or someone you know is suffering from end-stage alcoholism it is crucial to get them the help that they need before it is too late. Contact us today to learn more.

Tags: What is end-stage alcoholism?
0Likes

What Are the Signs of Dating a High Functioning Alcoholic?